Apple’s Worldwide Developer’s Conference wraps up tomorrow in San Jose, but for most of us non-developers, the action began and ended on Monday morning. For many, the most exciting news of the day was the oddly-named HomePod, a Siri device for your living room. With its seven-speaker array of tweeters, real-time acoustic spacial awareness, and a so-called “musicologist” inside, the HomePod represents Apple’s hope to make up in quality sound and privacy what it might lack in assistant smarts or the ability to order toilet paper with your voice. 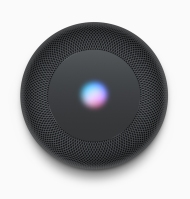 At $349 the HomePod (available in December) enters an already crowded market of smart home speakers. Right now you can buy an Amazon Dot for around $50, a Google Home for $130, and an Amazon Echo for $180. If Cortana is your assistant of choice, you’ll be able to get yourself  a Harmon Kardon Invoke in the sub-$200 range this Fall.  And if you’re not happy with any of the current assistants out there, you could wait for The Essential Home, “coming soon” from Android founder Andy Rubin. And of course there’s the Echo Show (coming at the end of this month) and the Echo Look (coming someday when they’ve figured out how to make it less creepy.)

I currently live in a home with one Amazon Echo and three Echo Dots and I have an Amazon Show on order. I know some of you believe that I am pure Apple Sheeple, but I probably won’t buy the HomePod. I might review one for iOS Today, but I won’t be spending any of my money on them like I have with my Echoes. I use my home speakers mostly for podcasts, simple questions, and shopping lists. Paying $300 for better sound and the ability to integrate with Apple Music isn’t worth it to me.

I’d love to hear your thoughts on the HomePod. Will you buy one? $349 is more expensive than any other home speaker, but its less expensive than many other Apple products. And what about privacy? To me, Apple’s nod toward keeping our data “on device” has always meant that Siri is never quite smart enough. Do you value your privacy over being able to find out what’s on your Google calendar when your hands are covered in brownie mix? Leave me a comment or you can always email me at megan@twit.tv.

5 thoughts on “HomePod is Where the Heart is”

This site uses Akismet to reduce spam. Learn how your comment data is processed.